As you walk in to a fast food joint and order some fries, you can sometimes only choose between “Medium” and “Large”. Not many ponder on why there is no “Small” if there is a “Medium”, but we can all agree that something is missing. This doesn’t only happen in the fast food industry but also in the entertainment industry. We are all familiar with violence and even ultra-violence, but what about super-violence? As A Clockwork Orange 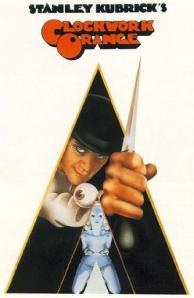 hit the theatres a new term was coined: ultra-violence. Parents were outraged, schools became afraid of gangs forming and committees were established to protect people from this horrible abomination called ultra-violence. The movie contained graphic violence and lacked moral values. It was a huge leap from regular violence often depicted in movies. But nobody questioned that leap. Nobody questioned what even happened to super-violence. People were too busy being horrified. But the truth is that ultra-violence was a construction created by several censorship authorities as their futile attempts with super-violence never worked. As long as man has existed, scapegoats have existed along side with us. Before videogames, there were movies, and before movies it was Rock n’ Roll and Jazz and way back it was books. As people pull insane acts and do horrible things to others we can’t understand why they do it, so we blame it on something. Like a book, or music or a movie, saying that the movie corrupt people’s minds and make them kill others. This makes it easier for people to deal with the situation. Toward the end of the 1960s, due to the hippie era and the Vietnam war, people became more accustom to violence and lack of moral values so it became hard to blame massacres and rape on movies or books. Something new became necessary so that people wouldn’t have to look within themselves. Several censorship authorities realised this and decided that something needed to be done, someone had to turn up the volume, so they created super-violence. They figured that movies, which were largely popular at the time, maybe could be even more violent and be stripped of values and virtues so that the population once again could be at internal peace. By creating a subsidiary called the Allondo Film Company they invested in several movies to hopefully create violent movies so that we once again could blame stuff on something. The Wild Bunch was one of the first new movies that included “super-violence”. The censorship authorities however, failed miserably. As The Wild Bunch took place in the wild west people didn’t get hardly as upset as the Allondo Film Company had hoped for. Everybody knew that the Wild West was violent and the whole concept of super-violence faded away. The authorities didn’t know what to do. Super-violence was a failure but people still sought scapegoats and people became afraid of themselves. The Allondo Film Company moved to England and changed name to PPR Entertainment and invested in a new director called Stanley Kubrick. Apparently he wanted to do a movie with extreme violence and more or less no moral values: a movie with super-violence just like The Wild Bunch. But PPR Entertainment stepped in and contributed with money and discussed with

Kubrick if not the movie would benefit from even more violence. Maybe even ultra-violence. This time the authorities wouldn’t do any mistakes and as A Clockwork Orange hit the theatres people, families and committees once again could join in protest with their fingers pointed towards Hollywood. The ultra-violence was born thanks to the extreme violence the movie depicted but also because the movie took place in the future, which scared people, as they believed that, it was where we were headed. Super-violence was quickly forgotten and later even hid from the history books. Instead ultra-violence inherited the throne as the #1 scapegoat.